Jay Z has pulled much of his music from Spotify, a main competitor to the streaming service he co-owns, Tidal. Late last week, the service honored the hip-hop icon and entrepreneur’s request to remove most of his catalog, Billboard reports, excluding collaborations with other artists including R. Kelly, Kanye and Linkin Park. A 2010 hits collection, including tracks “Izzo” and “99 Problems,” is still available at time of publication, as well. While earlier reports claimed Jay

Jennifer Lopez hit a few home runs of her own at the Billboard Latin Music Awards. Given her romance with baseball great Alex Rodriguez, we thought a few baseball metaphors might be in order. It’s fair to say she swung for the fashion fences on the red carpet Thursday at the awards in Miami, wearing a net-like gown that barely covered all the bases. And it was a hit, People said. Take a look: The ensemble got an assist from Jimmy Choo heels. Her stylists Rob and Mariel told 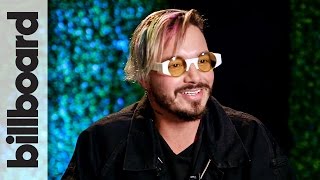 The 2017 Billboard Latin Music Conference started off on a high note with the Pop + Urban = The Perfect Marriage panel, featuring superstar speakers Reik, Wisin, Ozuna, Silvestre Dangond and ChocQuibTown's Tostao. The discussion, which was moderated by iHeart Radio's Enrique Santos, centered around the urban/pop collaborations currently dominating the Billboardcharts, and most importantly, the need for artists to maintain their integrity in the collaborative process. "We can

J Balvin poses with His 'Best Urban Song' For 'Ay Vamos' next to Nicky Jam holding His 'Best Urban Performance' For 'El Perdon' in the Press Room During the 16th Annual Latin Grammy Awards at the MGM Grand in Las Vegas on Nov. 19, 2015. When actor Vin Diesel met Nicky Jam met, “It was instant brotherhood,” says Diesel. “We knew where we had both come from.” And Diesel very quickly knew where he wanted Nicky Jam to go. The actor suggested Jam would be right for a role in this

Ozuna Defends His Music: 'I Would Never Sing Something Offensive to Others'

It's only been a year since urban singer Ozuna released his first track, growing in an unusual way. His songs and music videos on YouTube (none of which have fewer than 4 million views) have arguably given him a popularity that no other artist on the rise has established in the past five years or more -- and he has made very clear that his career is just beginning. The 21-year-old Jan Carlos Ozuna represents a genre that has been criticized by many people, that of Latin trap.

Songs About Coronavirus Are About to Become Big Business

KASEENO DROPS THE VIDEO TO CONVERTIBLE